“Growing up in the late 1960s and early 1970s the Second World War was still very much recent history and part of the public consciousness. For a child like me this was a believable, real life action adventure, that could be played out with the toys and games we had at our disposal and playground antics with friends. Because the effects of the war were still resonant through various aspects of society their manifestation through films and comic books from this period enhanced this awareness.

My Father was in Burma during the war, an experience that affected him deeply. I now 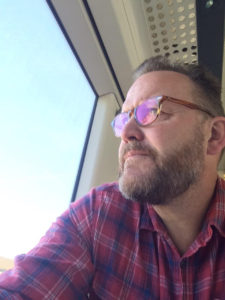 the irony of the situation; a child playing at war while all around my life was being shaped by the reality of it.Since childhood I have had a passion for making things and a deep interest in the craft that is involved. From constructing models and thumbing through comic books and contemporary colour magazines this has developed through the medium of print and 3D constructions.

My work has evolved through memories and reflection. By assimilating other experiences a symbiotic relationship develops:Image, object and memory,Multiplicity, variety and inclusion

I am stimulated by the joy of working with various materials and processes and the culmination of their usage in the realisation of the image.By manipulating and combining various printmaking methods I am able to exploit the use of my reference and primary source material. The nature of the various processes that are involved and how they can be combined can be very seductive as it allows the exploration of the concepts of size, scale and reproduction.

Following my Foundation course at Trowbridge Technical College I went on to study Fine Art, Painting at Camberwell School of Arts and Crafts.My MA was in Fine Art Printmaking, also at Camberwell. I currently teach Printmaking at University of the Arts, Camberwell, Brighton University and Morley College. I exhibit in the UK and internationally.”

“Most of my interest and fascination with objects and things originated from my childhood.In the 1970’s and 1980’s my love of films such as Star Wars, and serials such as Flash Gordon generated in me a strong interest in mythology. I’ve always loved to draw and make things, to make sense of my experience, and the environment in which I live. Man’s unique place in the world and ultimately the universe got me thinking at a young age ‘What the HELL are we here for?’

Someone asked William Burroughs’s ‘Why are we here?’ He replied: ‘We are here to GO!’ This mythic way of thinking certainly influenced and suggested to me the purpose of man’s spiritual and psychological journey in the late 20th and early 21st century.

I found expression in the mediums of various Printmaking processes, through Painting as well as occasionally three-dimensional pieces. The work on show is a culmination of nearly 28 years of an investigation. I trained as a Painter and as a Printmaker and I suppose these are the mediums that I feel most strongly about.

As a teenager I developed a strong passion for music, in particular punk and the garage bands of the 1960’s and 70’s, as well as interests in the art of children and primitive art. All of these influences formed the foundation of my visual observations and enquiries into nature, man’s relationship to the environment and his progression within it.

Much of my imagery is concerned with us as human beings, our landscape, as well as the inner landscapes incorporating the biological and botanical worlds to which we relate and link. I made various studies of plants, of landscapes and of living creatures within these habitats, both real and imagined.

Everything as I see it is in a constant state of symbiosis, of metamorphosis between objects and beings. This is often the way children experience in their grasp to make sense of things and it is this common ground that has often been the starting point for my practice over the years.” 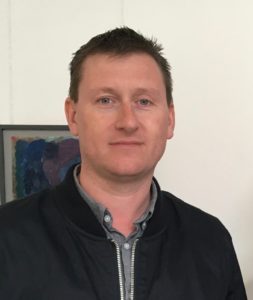 Paul Atkins writes of himself ” I was born in London in 1971. In 1980 I moved to Malvern in Worcestershire and from 1982 to 1989 I attended the John Masefield High School in Ledbury, Herefordshire.In 1989 I moved to London where I completed my Foundation Studies in 1990, specializing in Fine Art Painting at Harrow College of Art (now the University of Westminster).I studied BA (Hons) Fine Art Painting from 1990 to 1993 at Chelsea College of Art & Design and graduated in 1996 from Camberwell College of Arts with an MA in Printmaking.

I currently teach Printmaking at Camberwell College of Arts and am the co-founder of DBA Editions with my partner Fiona de Bulat at our workshop in Ramsgate, by the Kent coast. We have resided in Ramsgate since 2009 where we live with our three daughters.”