Listen to Graham on Radio Suffolk

Graham Crowley, a former Professor of Painting at the Royal College of Art has always been a maverick, wearing his distinguished international career as lightly as his trademark hand-knitted cardigans. A prolific, and intellectually rigorous artist, his breadth of interests, willingness to challenge presumptions, and exceptional focus inform his paintings, which are imbued with both the utterly strange and the deeply familiar.

Graham Crowley in his studio with ‘Two Dogs’. 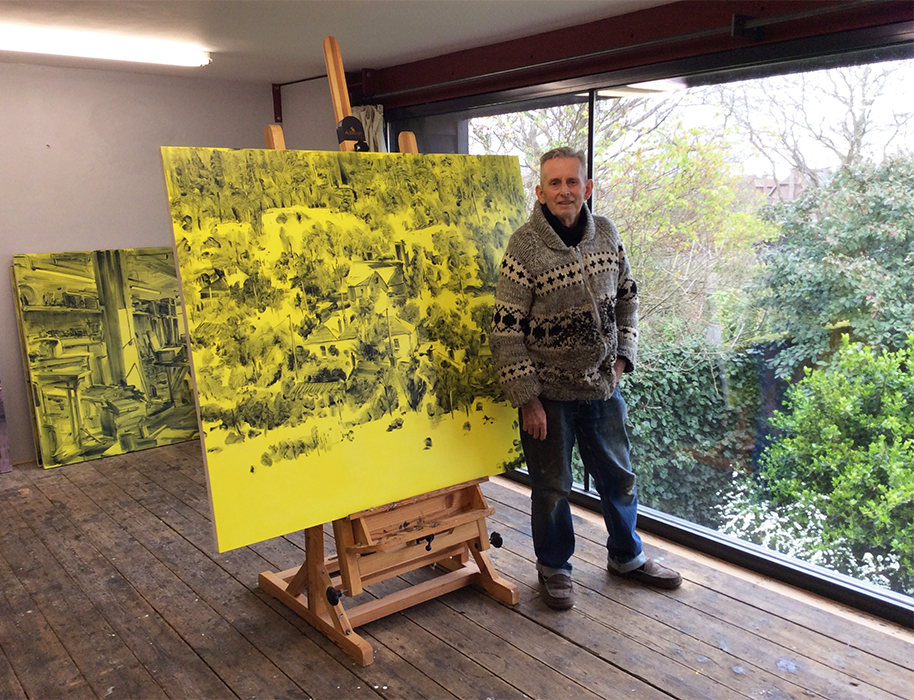 Crowley would say that he knows the origins of his idiosyncrasy. Born in Romford to a working-class family with a feisty mixed Irish Catholic and Polish Jewish heritage, he was an unusual child:
“I always had a collecting gene, one of my stronger suits is my nerdiness. I have a somewhat obsessive-compulsive streak. When I was six during the Suez crisis, I collected obsolete petrol coupons.
They were given to me by my Grandad who was a travelling salesman, and I was captivated by their exquisite engraving.” Engineering loomed large in the Crowley household “I grew up in a household full of engineers, surrounded by cars and motorbikes, with a dad who made TV sets and worked on radar in WWII. I was always fascinated by the idea of invention and innovation. I think that’s one of the areas where Modernism and I briefly overlapped.” 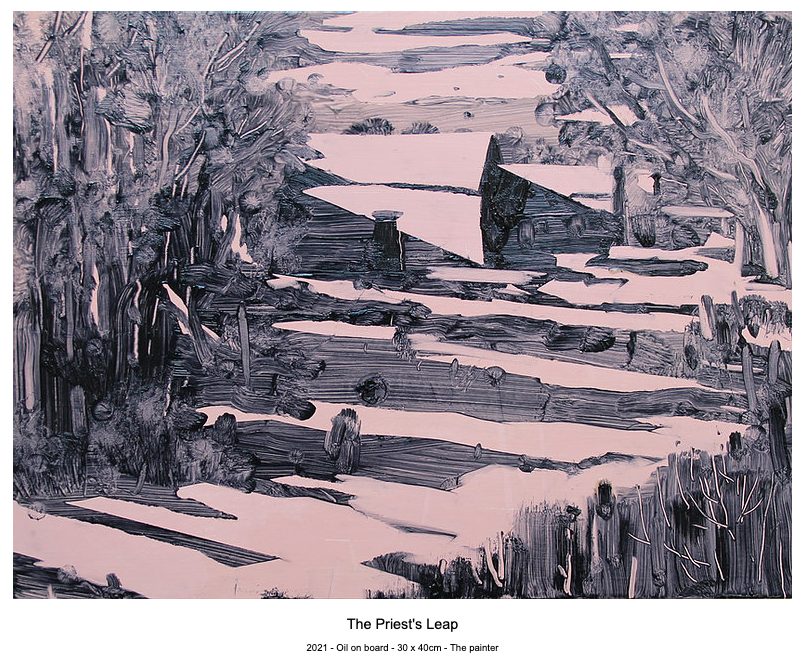 In 1968 art school offered an escape from Essex, and Crowley headed first to St Martins School of Art and later to the Royal College of Art to study Painting. “I went to art school at a time of social upheaval, when the prevailing view from the institution was that painting was dead. I thought the most radical way forward was to paint, but how to go about it was surprisingly complicated.” With a group of fellow painters from the RCA he negotiated a way forward, through what became known as ‘Post Modernism’.
“Post Modernism was impossible to define, anti-authoritarian by nature, it refused to recognise the authority of any single style or definition of what art should be. It collapsed the distinction between high culture and mass or popular culture, between art and everyday life. This early dawning led me to address issues about my self-confidence and convictions, about whether I needed to be ‘original ‘. My fellow painters and I travelled widely, looking at art, and started to carve out a space in this Post-Modern cultural landscape in which we felt we could operate as painters. Painters rather than artists. I have always found the term ‘artist’ problematic, and we all loved painting, we had this obsession, this passion for the activity.” 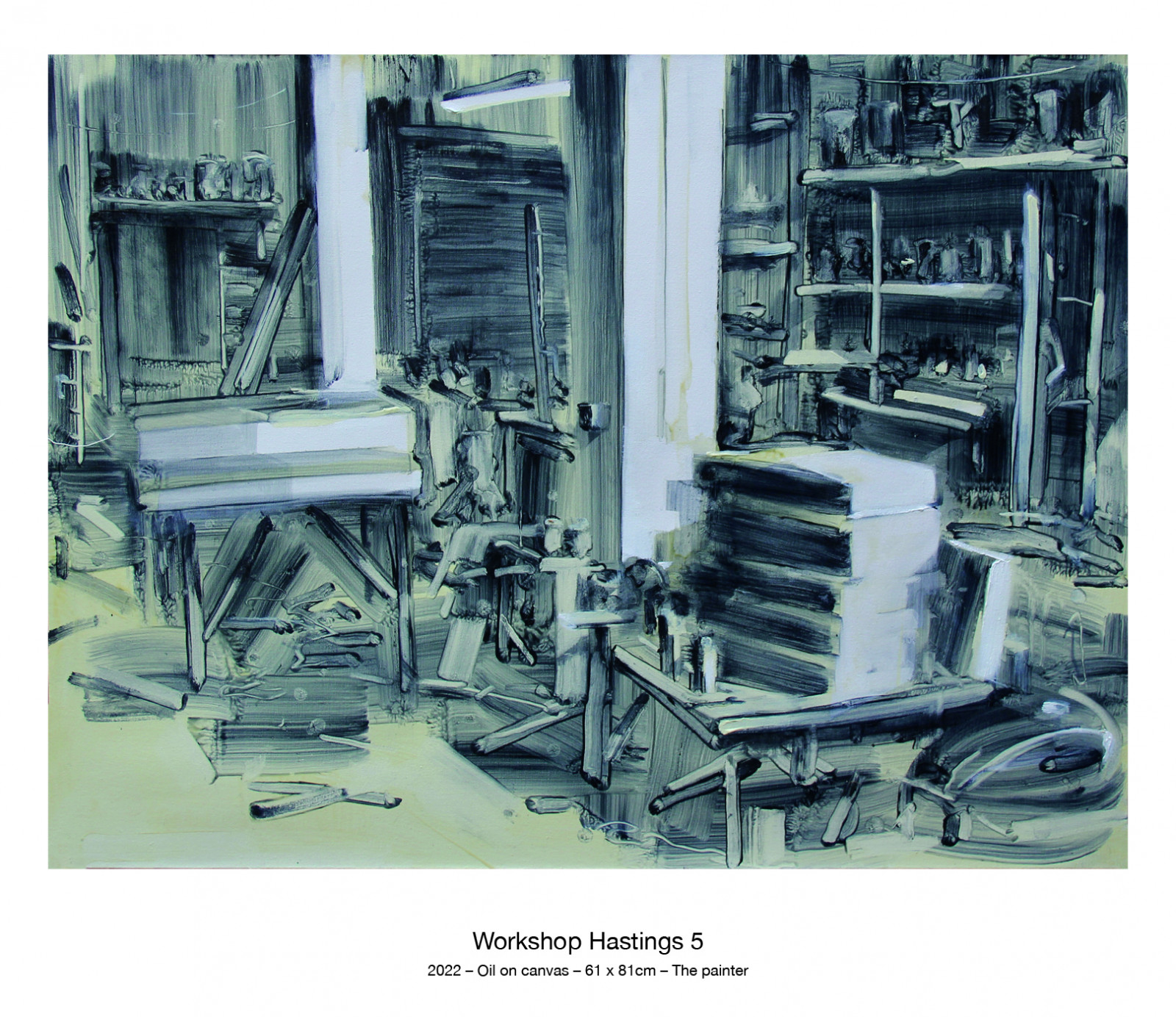 “The first job I had when I left the Royal College of Art was building racing motorcycles. I was a fitter, and I was quite good at it. I used to build my own bikes by myself and got up to the level where I could use a lathe. More recently I’ve collaborated on both designing and building.”  Always a motorcycle enthusiast, Crowley is also a well-known collector and restorer. He has attended the Isle of Man TT races annually since 1972 and in 2018 was commissioned by the Isle of Man Post Office to design a set of commemorative motorcycle stamps. 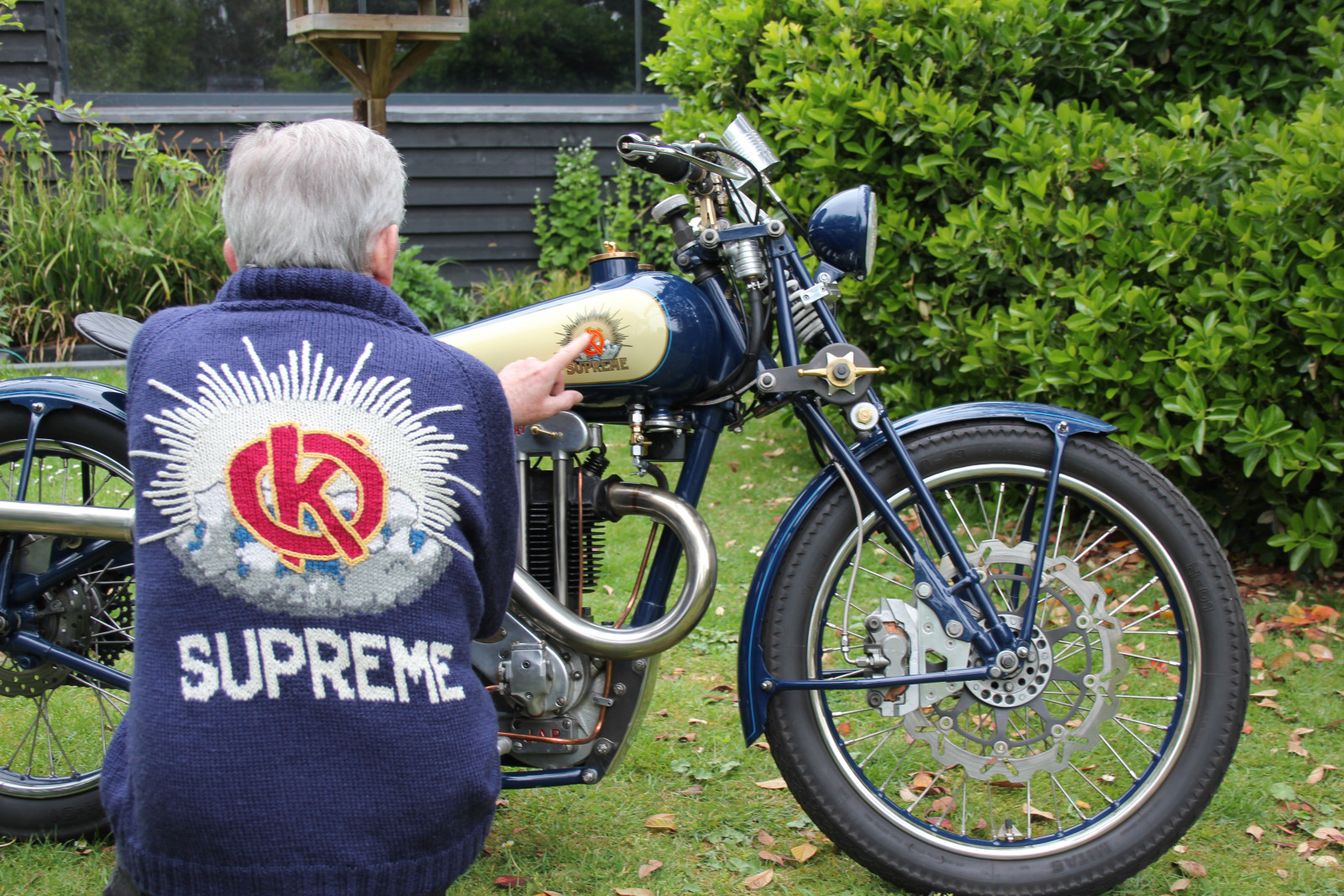 Graham Crowley with his OK Supreme wearing a cardigan designed by Betty Bamden.

Since the first lockdown in March 2020, Crowley has made over 160 new paintings, as well as finding time to create a vintage custom hybrid bike. This bike and another, an OK Supreme, feature alongside his paintings as natural companions. ‘Workplaces’ are paintings of engineering workshops. Crowley’s own in Wickham Market, his son’s in Hastings, but above all those local to him in Suffolk. Tiernan’s the world-famous Classic Motorbike dealer in Framlingham, and the wonderfully named Dark Arc Engineering run by Simon ‘Aubrey’ Aldred and Graham Hitching near Eyke. 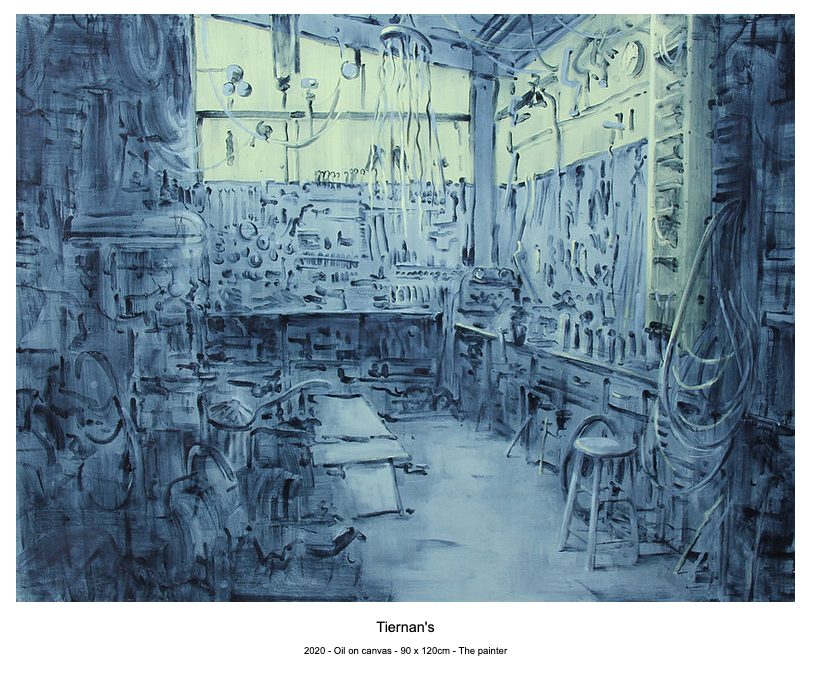 Crowley is an eloquent painter, whose thoughtful capacity to observe, and draw on history, transforms this subject matter from the unlikely to the highly significant.  His fluent and accurate drawing enables him to paint these detailed interiors with the lightest and loosest of fluid marks. The colour palette is limited, the emphasis is on capturing the mood and the quality and direction of light. Close up the paint, in smudges, smears and rapid brushstrokes, seems to dissolve on the canvas but as you move away the detail comes into startling focus. Rarely were spanners and socket sets, taps and dies so imaginatively transformed into powerful works of art. As Crowley says, “I approach painting in the same way as an engineer, except I am concerned with the materiality and physical properties of the paint.”

Bikes are a useful metaphor for Crowley, whose career has always taken unexpected turns. After a diverse career of exhibiting, residencies, visiting professorships and keeping out of all the ‘old boys’ clubs,’ Crowley was appointed Professor of Painting at his ‘alma mater’ the Royal College of Art. This was a both a surprise for the establishment and a significant choice. Crowley is passionate about the importance of art education and deeply attentive to the needs of students. He stayed eight years, transforming the Painting School, bowing out as the RCA became increasingly managerial in style.

Ending this demanding teaching career in 2006, he and his fellow artist wife Sally first relocated to the lush countryside of West Cork, and then eight years ago to Wickham Market in Suffolk. Here he immediately embarked on exploring the landscape, his new garden, and the desolate coast. From his well-ordered, new studio perched above the garden, Crowley continued to work prodigiously. The paintings in Wildspaces range from the bleak sites of Orford Ness and Shingle Street to the comfort of the garden below populated by his wife and their ever-present dogs. 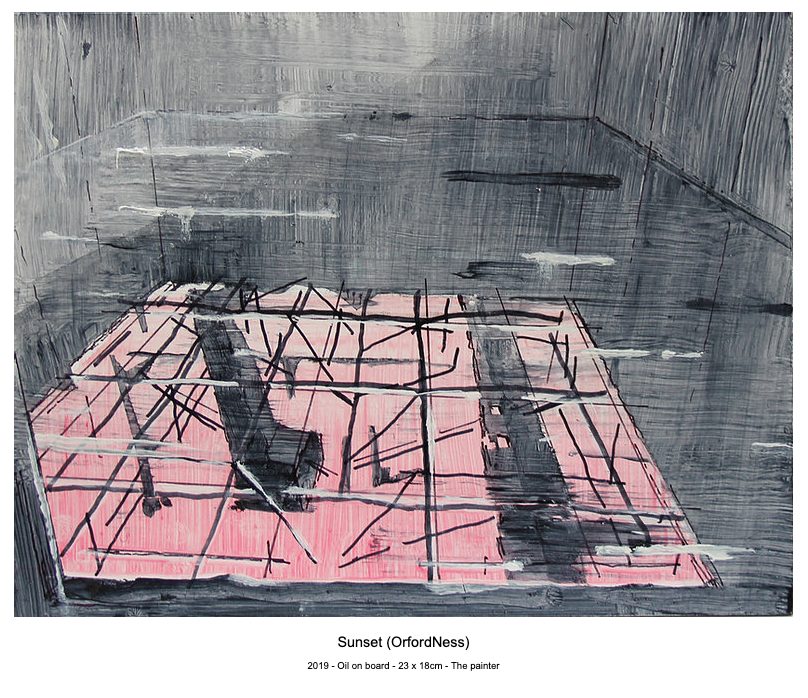 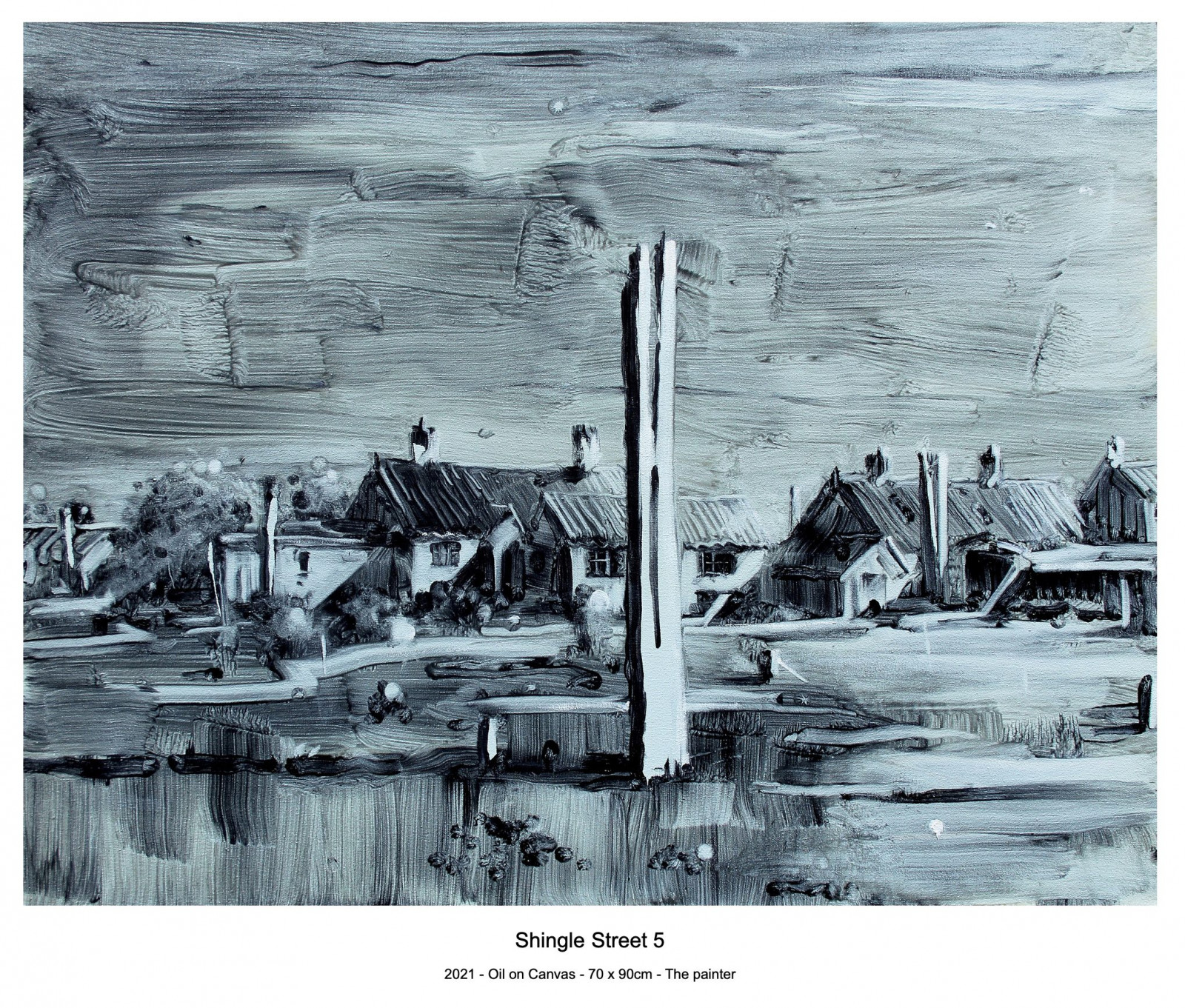 Sparsely painted with one dominant colour, these paintings concern themselves with the luminosity of the landscape and the importance of directional sunlight. The accurate drawing is counterbalanced by the paint which hovers and dissolves on the canvas, the absences as crucial as the marks. Informed by his prodigious knowledge of art history, (Crowley will always wryly tell you that most people confuse the history of art with the history of the art market) he has his ‘favourites’. He looks to the locations of Constable, an artist he had always revered, with his re-interpretation of Willy Lott’s Cottage, but more to Samuel Palmer the visionary Romantic painter of landscape who reinvented the pastoral convention. 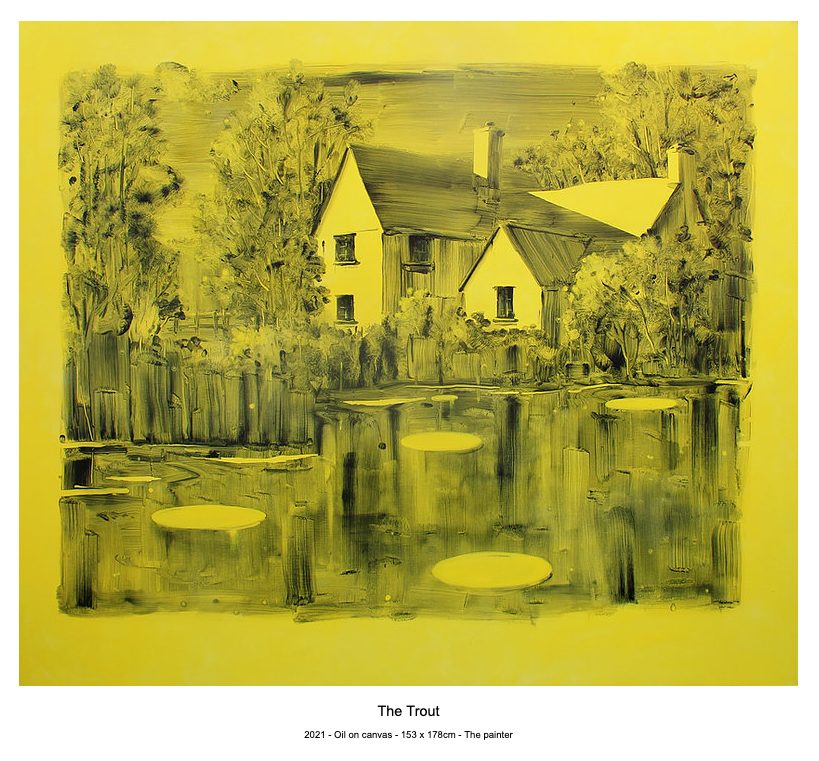 Reinvention is a key word for Crowley’s work and no more so than in his flower paintings, a series started over 30 years ago and unlike any other contemporary flower paintings. Historically, flower painting was often the realm of the amateur, but Crowley has taken the genre, reimagined it and transformed it with an age-old technique called grisaille. Using Payne’s Gray, a colour notable for its lack of black, the resulting highly glazed monochrome paintings are nuanced, delicate and deliciously sensual, reminiscent of Dutch 17thCentury flower painting. 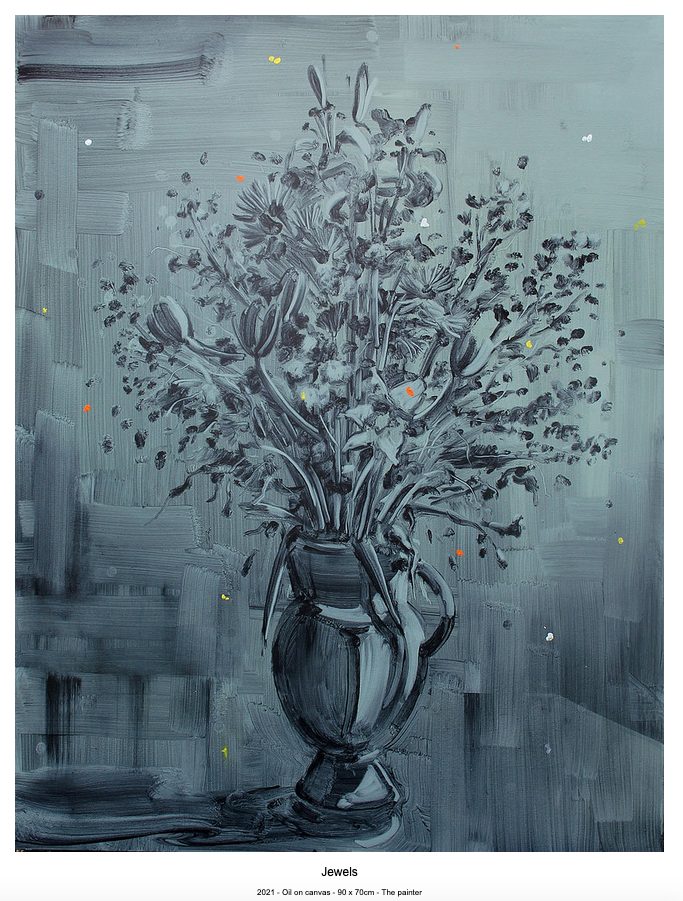 Crowley is not a joiner; rather a loquacious outsider, quick to speak his mind on the issues that interest him, with an encyclopedic knowledge of motorcycles, avant garde films, education, art and yes, stamp collecting. And music. “Music has always been an important part of my life, whether it has been punk, experimental, power electronics, ambient or industrial music but particularly Captain Beefheart. I have one of the most comprehensive collections of his work, printed as well as recorded music including vinyl and acetate. I have met him, but that’s another story”. In Suffolk Crowley, always up for a new project, has taken up the piano. Starting from scratch aged 68, he is now proficient and explores contemporary music on the elegant baby grand which graces his living room.

Viewing Graham Crowley’s lucid and luscious paintings is always an adventure. Although they are at first glance ‘accessible’ there is always a journey in the experience. “I have a respect for invention, and I think that’s what attracts me to the margins in all things. I want my music, my reading, and my paintings to be demanding, I want it to be engaging, I want to feel it’s actually happening. I recognise that to be perplexed is probably one of life’s most profound experiences. The idea of not knowing what you think about something is enabling rather than disabling. It forces you to question your assumptions and lazy answers. I would like viewers of my paintings to be engaged and perplexed.”

A generous enthusiast, with the energy and commitment of someone half his age, Crowley’s ambition, vision, and consummate ability, place him as one of the most significant and interesting painters working today. 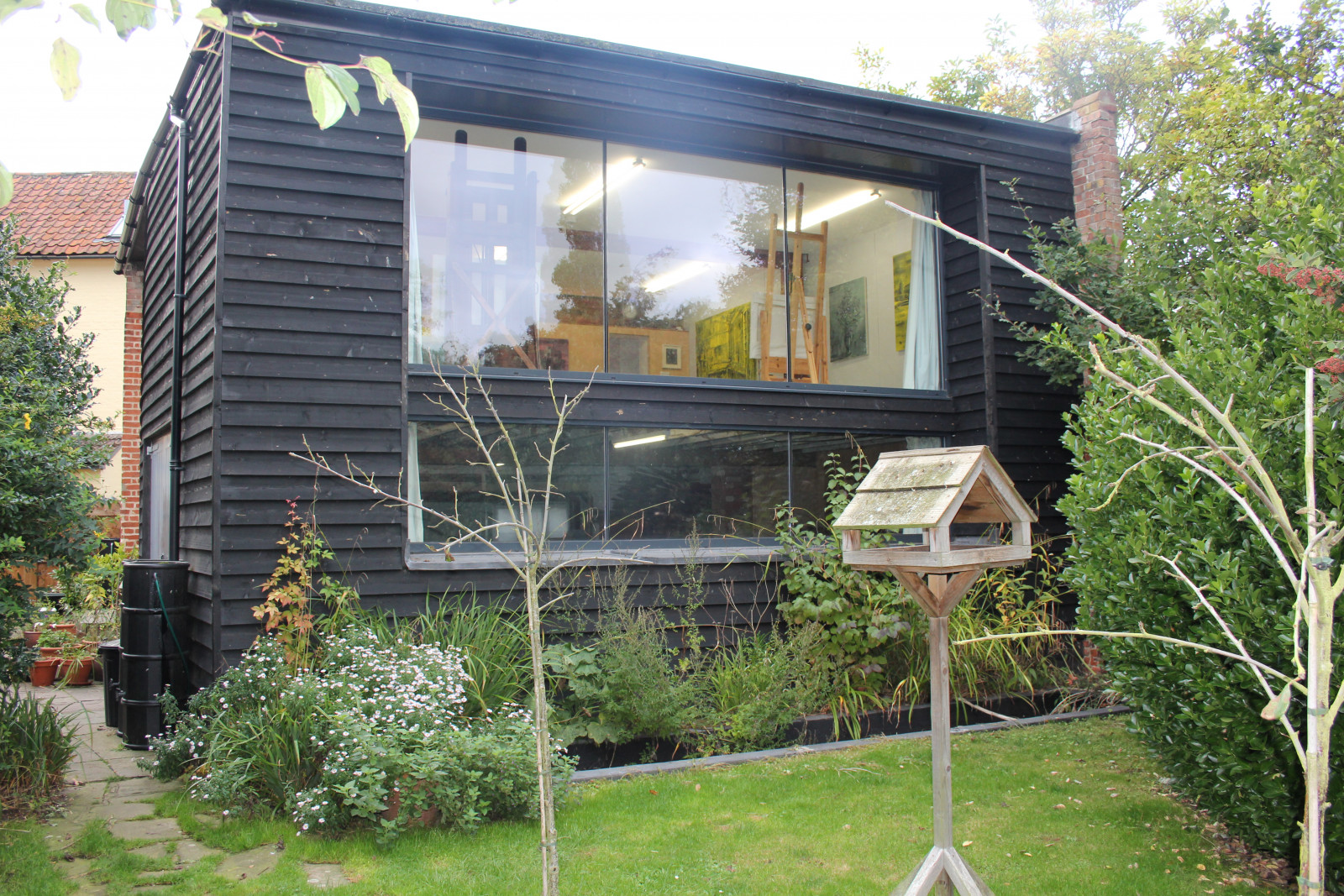 The artists studio from the garden 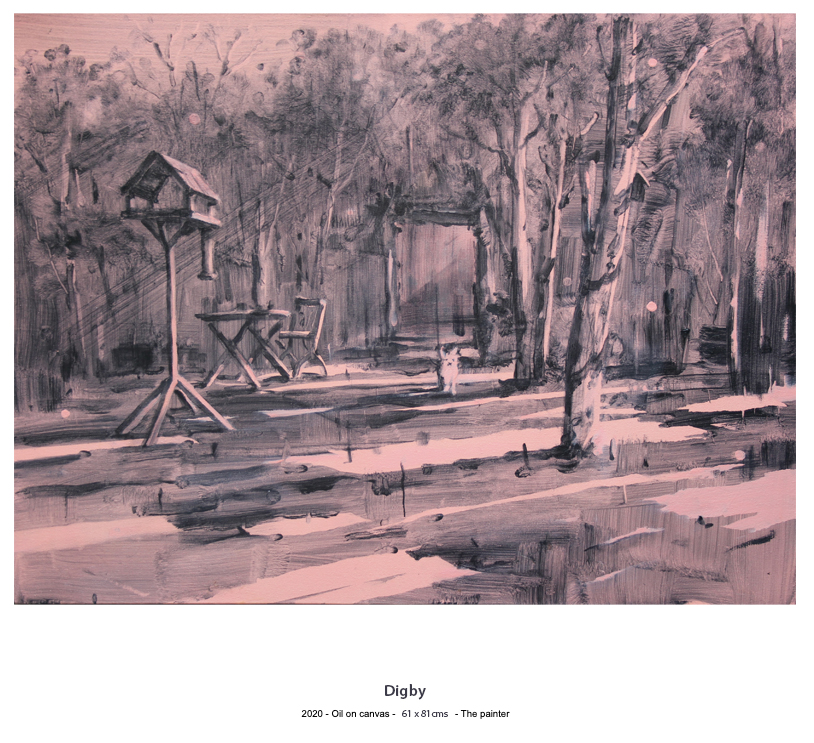