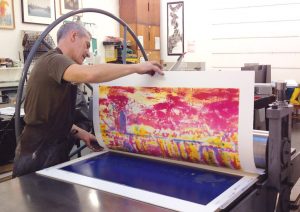 Steve writes : “I obtained a BA in Textile design at Camberwell School of Art in the early 80s. While studying I was introduced to printmaking, mainly silkscreen and monoprint. I took up printmaking again in the late 90s at the City Lit and fell in love with etching. I joined East London Printmakers in 2003, which gave we access to a well-equipped studio. I started experimenting with lino in 2005, and this has now become my main means of expression. I etch the surface of the lino to create relatively uncontrollable marks which I combine with the traditional cut marks to build up multi-layered prints. Living in London for over 30 years has given me many opportunities for observing the city and its multi-various moods. My prints mostly derive from photos that I take. The photograph I choose to capture in print is usually about a specific mood or atmosphere created by the light, the elements, the location and my emotional response. I like the juxtaposition of the transience of the manmade with the elemental.