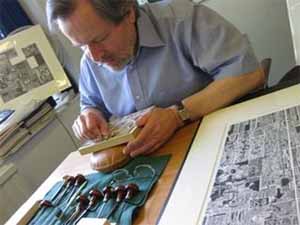 Born in 1951. Attended art college in Bristol gaining a degree in Graphic Design, specialising in Illustration. After working as a freelance illustrator and as designer at the University of Bristol, I joined a company of specialist book designers in Oxford. I am currently Managing Director of Oxford Designers & Illustrators.

As well as exhibiting with these societies, I have exhibited regularly at the National Print Exhibition (Originals), winning five awards and at the Royal Academy Summer Exhibition. In 2003 I was awarded the Rachel Reckitt Open Prize given each year to a UK engraver. In 2007 I was awarded the Printmaking Today prize at the RE Annual Exhibition at the Bankside Gallery in London. I was given the Lark Trust Award for ‘Innovation in Engraving’ at the RWA Open Print Exhibition in 2009. Winner of the Clifford Chance Purchase Prize at the Mall Galleries 2012 and awarded the Rachel Reckitt Prize again in 2012. My work is included in the survey of world engraving, “An Engravers Globe”. The 2009 book “A Being More Intense” features myself and five other engravers.

I have been influenced by the St.Ives tradition (the print ‘St.Ives’ won the Aberystwyth University Purchase Print Prize in 2009) and also by listening to contemporary jazz. The combining of structure with the freedom of expression demonstrated in this music is often what I am trying to achieve in my work. Having worked with completely abstract images, I am now exploring the idea of engraving in different styles, as if in a collage, but within a single print. I enjoy being part of the long and distinguished history of wood engraving but using traditional techniques to express my own vision.

Wood engravings are traditionally small, cut into endgrain boxwood and printed from the relief surface. However, the majority of my prints are engraved on Resingrave, a synthetic material designed especially to replicate the quality of boxwood and which allows me to work larger.